WHAT IS A CRUT?

A charitable remainder unitrust (CRUT) is an estate planning strategy often of particular interest to those who hold appreciated, low-basis assets and have, among their objectives, the wish to diversify their holdings while continuing to defer capital gains,  generate income tax-efficiently, and potentially leave a significant gift to charity. That’s a wide range of benefits, which is why the CRUT is sometimes called the Swiss Army Knife of wealth transfer strategies.

HOW DOES IT WORK?

A CRUT is an irrevocable trust that is created for a period of time, either single or joint lives, or for a fixed term of up to twenty years. Once the trust is created, assets — ideally high-value, low-basis — are contributed to it. At the date of the gift, the donor  (who can also be the trustee) becomes entitled to a charitable income tax deduction equal to a percentage of the value of those assets (more on that percentage, below).

Once appreciated assets are contributed, for example, a concentrated position in a single low-basis security, they can be sold by the trust, then reinvested gross of tax for diversification purposes. No tax is immediately payable, because the trust is a charitable entity.

From the year of the creation of the trust until it terminates, the person creating it (or anyone else named) is entitled to a tax-favored (more on this later) annual income stream from the trust. This stream is calculated as a percentage of the value of the trust’s assets at the end of the prior year, according to certain IRS rules. This calculation is important to understand and central to the trust planning process; we will explain it below. But in any event, if the portfolio within the trust appreciates, so does the annual income stream.

Finally, at the end of the trust’s term, the remaining value in it (and this is the “remainder” part of a CRUT) goes to one or more named charities.

The annual distribution to the income beneficiary, who is chosen when the trust is created, must be between 5% and 50% of the CRUT’s assets and also provide a 10% minimum actuarially determined remainder amount to the charity at its end.11 Whether that remainder is 10% or higher is up to you as the grantor and will affect you in certain ways that you will want to consider in the planning process. In general terms, the higher the distribution percentage, the lower the charitable income tax deduction and amount remaining for the charity. Conversely, the lower the percentage, the higher the income tax deduction, and the more that will potentially remain for the charity. Note also, in CRUTs created for the term of a life or lives, the older the grantor, the lower the income distribution will compute to be, because of the 10% remainder-to-charity requirement.

And there are tax benefits associated with these distributions, as well. As illustrated by the diagram to the right, your distribution is sourced from an IRS-stipulated series of five “pools” in the trust. Your distribution, which again is sized to satisfy your annual distribution requirement, is first taxed as ordinary income until that pool is exhausted, then onto the next, and so on.

These pools are 1) ordinary income, such as dividends & interest; 2) short-term capital gain; 3) long-term capital gain and 4)  tax-free income such as municipal bond interest, and finally 5) principal. 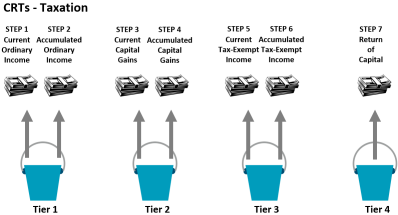 So what is the tax advantage? If you contributed a large, low-basis position and it is sold in the CRUT, and the proceeds are then invested mindfully, much of the annual distributions will be taxed at long-term capital gains rates, until that pool is exhausted. The charitable deduction will never be equal to 100% of the assets contributed. That is because it is computed2 as the present value of the remainder to the charity. In practice, it tends to run at about 30-40% of the asset contributed. And whatever the amount, it is subject to the standard percentage of adjusted gross income (AGI) annual limitation.

1 Based on the initial fair market value of the trust’s assets.

2 Using IRS annuity tables incorporating the age of the donor and the percentage of the distribution.

VARIATIONS ON A THEME

There are other versions of Charitable Remainder Trusts. Some of the more popular are:

Clearly, the CRUT, for all its benefits, is considerably complex. It will require the counsel of an estate planning attorney and tax professional, along with guidance from your Fieldpoint Private advisor. If you would like to learn more about CRUTs and other techniques that might be applicable to your circumstances, talk to your Fieldpoint Private advisor about a complimentary estate plan review.

Not approved for client use. This material is intended solely for the information of those to whom it is distributed by Field-
point Private. No part of may be reproduced or retransmitted in any manner without prior written permission of Fieldpoint

Private. Fieldpoint Private does not represent, warrant or guarantee that this material is accurate, complete or suitable for any
purpose and it should not be used as the sole basis for investment decisions. The information used in preparing these

Private assumes no obligation to update or otherwise revise these materials. This material does not purport to contain all of
the information that a prospective investor may wish to consider and is not to be relied upon or used in substitution for the
exercise of independent judgment and careful consideration of the investor’s specific objectives, needs and circumstances. To
the extent such information includes estimates and forecasts of future financial performance, such estimates and forecasts
may have been obtained from public or third party sources. Fieldpoint Private has assumed that such estimates and forecasts
have been reasonably prepared on based on the best currently available estimates and judgments of such sources or represent
reasonable estimates. Any pricing or valuation of securities or other assets contained in this material is as of the date provided
as prices fluctuate on a daily basis. Past performance is not a guarantee of future results.
Wealth management, investment advisory, and securities brokerage services offered by Fieldpoint Private Securities, LLC.
Such services and/or any non-deposit investment products which ultimately may be acquired as a result of Fieldpoint
Private’s investment advisory services:
ARE NOT FDIC INSURED – ARE NOT BANK GUARANTEED – MAY LOSE VALUE
© 2020 Fieldpoint Private. All rights reserved. Banking Services: Fieldpoint Private Bank & Trust. Registered Investment
Advisor: Fieldpoint Private Securities, LLC is a SEC Registered Investment Advisor and Broker Dealer. Member FINRA,
SIPC.